AgriTech, key to the future of agriculture in Morocco

Moroccan agriculture, which is already held up as a model on the continent, through the “Plan Maroc Vert”, is in the midst of a technological transformation. Climate hazards, rural exodus, training of young people… New technological tools provide solutions to the issues faced by the sector and contribute to its resilience.

2020 has been a record year for investments in AgriTech and FoodTech globally with AgriTech startups raising $11.6 billion in funding in 2020. Moreover, the trend is expected to continue in 2021, including in Africa. As 2021 sees a resurgence of food security crises, AgriTech appears more than ever as an alternative. An approach that has been adopted in Morocco, among other countries.

While the digitalization of the agribusiness is already at the heart of the sector's development challenges in Morocco. The Kingdom, a major continental producer that sets the standard through its “Plan Maroc Vert” implemented in 2008, is accelerating its digital transition in light of lessons learned from the COVID-19 crisis. "We have seen, around the world, supermarket shelves empty during the pandemic due to lack of supply. In Morocco, we did not experience any shortage, because we produce locally", underlined Moulay Hafid EL ALAMY, the Moroccan Minister of Industry, Trade, Green and Digital Economy, who, on June 8, dedicated his "industry meeting days" to the agro-industry.

The agricultural sector, a pillar of the Moroccan economy, contributes up to 20% to the GDP and employs 40% of the active population (80% of which is in rural areas). The sector provides direct or indirect income to 15 million people (more than 40% of the Kingdom's population). Nevertheless, the Minister recognizes that in order to encourage local players to think and produce "locally", it is necessary to help them address the challenges facing the sector. Faissal SEHBAOUI, Managing Director of AgriEdge, a Business Unit of the ecosystem of the Mohammed VI Polytechnic University (UM6P) in Benguerir (75 km north of Marrakech), believes "the challenge of agriculture, whether in Morocco or in other African countries, is to produce more, taking into account population growth, but also to produce better, to reduce the waste of natural resources and to protect the environment for sustainable production".

Inspiring the country's next generation of entrepreneurs

This is particularly true for the digital component. In early May, Impact Lab, an “African innovation accelerator” as it calls itself, launched the Launchpad Agritech, a program, designed to accelerate the marketing of Moroccan Agritech startups, but also to inspire the country's future generation of AgriTech entrepreneurs. This will address key issues in the sector such as sustainable agriculture, food security or wealth creation in the rural world.

“We are convinced that Morocco has the potential to position itself as a major innovation hub in the agro-industrial sector in Africa. However, the ecosystem of Agritech startups in Morocco is still weak, and little is known about the opportunities for innovation in this sector,” says Salma KABBAJ, co-founder and CEO of Impact Lab.

Present in North and West Africa since 2015, Impact Lab on the one hand, supports African startups that want to accelerate the development of their project and, in parallel, companies and public institutions that are aware of the importance of innovation for their competitiveness and therefore want to engage in a more dynamic way. It is within this framework that the "Launchpad Agritech" program has been launched.

A program dedicated to innovative solutions in agro-industrial value chain

“It is a program dedicated to innovative solutions in the agro-industrial value chain,” says Salma KABBAJ who also specifies its three main objectives. “The first is to make aspiring entrepreneurs aware of the value creation opportunities in this value chain. Often entrepreneurs do not measure the impact and uses of these new technologies in this sector and still have a very traditional vision of the activity”. To this end, awareness-raising tools are made available to them to introduce and familiarize them with these new technologies. “The second objective is to support a dozen Moroccan startups in the launch of their project through an intensive six-week program, after which they will design a product prototype and launch it on the market.” Finally, the third objective is to connect these 10 startups with companies and Impact Lab's institutional partners who may be interested in their solution.

At the same time, the idea is to encourage South-South cooperation in the sector, an element that is part of Impact Lab's DNA. “Over the last few years, we have supported 175 startups from 17 different countries in Africa and we are really anchored in the region,” emphasizes Salma KABBAJ. “Because we are convinced that innovation must be dealt with on a regional scale. This is whether for startups that need to go to regional markets or companies that need to find the most relevant solutions regionally. Impact Lab has developed activities in this sense, for example we are currently collaborating on a FinTech program with an accelerator in Ghana”. She added: “We think that more and more opportunities for synergies exist between the different markets in Africa, especially in AgriTech, because we have common challenges, including improving productivity, resource management, improving the value chain and disintermediation of this value chain ... These are common topics for many farmers in Africa. There are good practices to share between startups and agribusinesses on the continent.”

Convinced as she is that the future of the agro-industry in Morocco, and more broadly in Africa, lies in AgriTechs, the CEO of Impact Lab believes that initiating and equipping the sector’s stakeholders with the latest technologies available is fundamental. "Technology has revolutionized the global agro-industrial sector in recent years. Collecting and analyzing data to make better decisions is the main impact of technology in the agro-industry. Today we have sensors, satellite imagery, drones, which allow taking data on climate, diseases that can affect crops, etc. Those data are analyzed in real time to allow farmers to make the best decision at the right time. When to plant, when to irrigate, when to treat the soil... Other uses are also emerging such as robots that replace manual activities, including pruning or harvesting for example, in a more efficient way. There is also the blockchain, which secures exchanges between the various stakeholders along the entire value chain. A very important element that allows greater transparency and guarantees the small farmer gains adapted to his activity .These are fundamental elements that will make the agribusiness sector integrate new technologies as the new standard," the co-founder and CEO of Impact Lab says in conclusion.

That process has more than begun on the continent where 80% of farms are small and where the development of AgriTech is proving to be a key lever for reducing food insecurity. Indeed, investors made no mistake: according to the latest Partech report, AgriTech ($179 million) comes behind FinTech ($356 million), among the five most attractive sectors. The seeds of Agriculture 4.0 in Africa are being sown...

MoroccoTech, showcase of a digital Morocco

Morocco recently launched the MoroccoTech initiative, a national brand to promote the Moroccan digital sector. This action is intended to position the country as a digital destination internationally and to create an global dynamic that will benefit all Moroccan ecosystems in their digital transformation.

The Dot: an incubator to fulfill Tunisia’s digital ambitions

Launched in early June, the Tunisian start-up accelerator The Dot aims to become the national hub for digital entrepreneurship. Attaining this objective will be premised, in particular, on improved employability of youth. 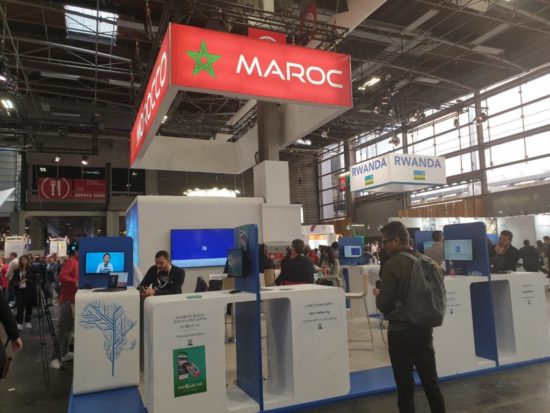