Women’s innovation movement JFD inaugurated on March 23 its first growth accelerator in Africa, at the heart of Libreville, Gabon, the 6th most connected African country in the world and the future digital hub of Central and West Africa, according to a World Bank report. Delphine REMY-BOUTANG, CEO of JFD, President of the Global Entrepreneurship Network France and Camélia NTOUTOUME LECLERCQ, Minister Delegate to the Minister of Higher Education, Scientific Research and Technology Transfer and JFD Ambassador tell more.

On March 23, you inaugurated the first growth accelerator in Africa, the first of JFD in Africa. What is the point?

Delphine REMY-BOUTANG: JFD GABON is our very first growth gas accelerator in Africa, at the heart of Libreville. We want to bring together women entrepreneurs, the backbone of the African continent and the engine of this digital revolution. It is a place of innovation, a space of exchange and emulation where we will conduct training, organize international events, networking moments and create financing opportunities for entrepreneurs seeking funds to develop their innovative projects. Our goals include training 500 women and launching 5 startups founded by women by 2022 with our first local partner, Comilog, Eramet Group. We also hope to have a Gabonese woman among the 2022 winners of the JFD Margaret Awards.

What is the context of this opening on African soil? Are others planned?

Delphine REMY-BOUTANG: We are gradually expanding our presence in Europe and Africa. Our mission is to accelerate the growth of women-led tech companies and to federate public, private and media actors to build bridges and links between Europe and Africa. Since 2013, we have been building a powerful pan-African and pan-European network of women who are changing the world, because alone we go fast, but together we go far. The JFD Club founded in 2016 in Paris is a network of over 400 influential women who meet throughout the year to network. We also have many ambassadors in different African and European countries : Edith Brou in Côte d’Ivoire, Arielle Kitio in Cameroon, Josephine Ndeze in DRC, etc.

What is the main interest for Gabon?

Camélia NTOUTOUME LECLERCQ: Before answering your question, let me first define what a growth accelerator is. An accelerator is an entrepreneurial support program for startups and companies in the growth phase. Joining an accelerator means joining a coworking space and a network of entrepreneurs, intrapreneurs, and experts.

Gabon's interest is to consolidate its achievements and to develop other spaces. A World Bank study conducted in 2018 reveals that Gabon is the first country connected to ICT in Central and West Africa. Besides, faced with the rise of digital technology in all sectors of activity, our country cannot remain on the fringes of this global technological revolution.

Hosting the first growth accelerator of the JFD in Africa, rests also with the will of the Head of State, Ali BONGO ONDIMBA, to place women at the heart of Gabon's growth and to reduce gender inequalities through the launch of the Women’s Decade.

How is the Gabonese Tech ecosystem evolving?

Camélia NTOUTOUME LECLERCQ: Remarkably well! In Central Africa; Gabon occupies the 1st place in the digital world. It has several digital start-ups, digital incubators, companies and digital communication agencies. We are one of the few countries with a high internet penetration rate. This is a very considerable asset. The digital tool that has become essential for any country that aspires to development now participates in the good performance of all services around the world. In Africa, several countries have understood its importance and immediately jumped on the technology bandwagon. In Gabon, for the past decade, the government has been gradually introducing digital tools in the various administrations. Anything that simplifies certain administrative procedures thanks to dematerialization and reduces the time needed to find information: the digitalization of public service is designed to meet the expectations of users.

About the few flaws we can mention, there is the essential need to raise awareness among users on the importance of digitalization. The supervision of young people for a rational and profitable use, would considerably avoid the equivocations observed in the Gabonese digital ecosystem.

In concrete terms, how will this growth accelerator work? What services will be delivered?

Camélia NTOUTOUME LECLERCQ: JFD GABON will work in a strategic way to identify, train, strengthen, network, coach, mentor and create visibility around young girls and women in the public and private sectors. We have digital equipment that we make available to women in our accelerators. We organize training sessions that we conduct or that we hold with our partners. We have, for example, organized with our media partner Gabon 24 several training sessions, the last of which helped fifteen women entrepreneurs build and deploy their communication strategy.

To conclude, why is it important to connect digital women entrepreneurs from Europe and Africa?

Camélia NTOUTOUME LECLERCQ: You can have the best product, develop the most interesting service, but if nobody knows what you do, nobody will come to buy what you offer. If you don't know how to sell your product, no one will want to come to you, they will rather go to your competitor. At JFD Gabon, we prepare these women to conquer Africa, but also the world because JFD is international. We have a pan-African but also a pan-European dimension. Our added value is to allow these women entrepreneurs to face the world of entrepreneurship with solid tools: this is how we bring them to light. We connect them to other women who are doing the same thing in other countries and who have succeeded. In short, inspiring women. In addition, there are role models. If someone is successful and doesn't share their experience with others, their success is useless. We have to be role models; we have to pull others up. 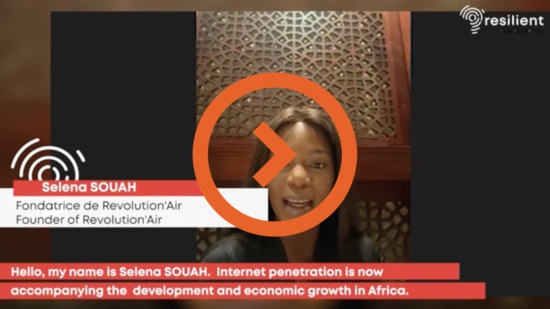 Series: Make internet affordable in Africa – At 29 years old, the French-Gabonese Selena Souah is making an ambitious step: to democratize internet access in Africa. To do so, she created Revolution’air, a Rwandan Internet service provider with pan-African aims.

A mechanical engineer, Nneile NKHOLISE, is co-founder & CEO 3DIMO, which automates livestock data analysis to monitor animal health. She is the 2021 winner of the Margaret Entrepreneur Africa Award. Portrait.