While the deployment of Internet is accelerating on the continent, it remains a luxury product for many people. Moja, a solution developed by BRCK, adapted to specificities of African market, responds to this double problematic: inform and deliver digital tools particularly useful in pandemic period through an Internet subscription model affordable to all purses.

Having an internet connection does not immediately appear to be a priority for many families, where food, access to water, electricity, education and health are still an everyday struggle. What if Internet was the solution? At least that is the conviction of Eric HERSMAN, one of the pioneers of the technological ecosystem in Africa, among others, founder of BRCK company, based in Kenya. Namely, to democratize the use of the Internet in Africa to facilitate access to information, educational content, and a range of other digital solutions, including for the poorest populations and in the most remote areas.

"We know that the speed of information dissemination on Internet has the power to promote economic growth and facilitate social development. This impact can be achieved through accelerated access to products and services in key sectors such as agriculture, education, financial services, government service delivery and health. However, when large sections of a country's population cannot access Internet, they are cut off from information that could save their lives," explains Erik HERSMAN.

The model developed by Moja thus offers users, thanks to connection points scattered throughout the territory as well as in public transport, the opportunity to view and interact with the broadcast content through an immediate incentive in the form of Moja points that can be used for connectivity and access to premium content. "To use Internet, people don't have to pay money, but just a few minutes of their time to answer online surveys, take training courses or watch videos sponsored by local companies. In exchange for this, they have free, unlimited access to informative, educational, entertainment, job search and work content online. "They can also learn about the evolution of the pandemic and barrier gestures.

Among first hardware startups in Africa, BRCK has developed a model of affordable public Wi-Fi infrastructure in fixed locations and transport vehicles (1,500 and 1,200 sites respectively) that has connected 2 million people and has 8 million sessions per month, in Kenya and Rwanda and plans to deploy in DR Congo and South Africa. According to its forecasts, the company should multiply its network by 5 in the coming months and diversify its fields of action. After education, developed among others through the Kio Kit application, Erik is now planning to tackle the energy sector.

Inform and collect data from populations in times of crisis

"Building pipelines to deliver relevant and timely content to population groups, regardless of location or financial capacity, is critical in the midst of this 21st century pandemic," says Erik HERSMAN. This requires an internet connection.

"The information on Covid-19 is the first thing users see when they connect to Moja Wi-Fi," says Erik. With more than 200,000 Kenyans registered on the special channel set up by BRCK to broadcast information on the evolution of Covid-19 from the very first days. "Public service announcements to the public are the main way to stop the spread of the disease, but getting feedback from the community is equally essential to monitor transmission and adjust strategies." Thus, data collected by Moja, made available to public actors, allows them to adapt their strategy as well as their communication with populations for greater interactivity, especially in times of crisis.

BRCK is the result of the background and expertise of Erik HERSMAN, a child from the continent who grew up between Sudan and East Africa, a graduate of Kenya's Rift Valley Academy and Florida State University from which he graduated as an engineer. A player in the regional ecosystem, he is involved in the creation of several platforms that will become references, including Ushahidi and iHub.

According to World Bank, Internet penetration in Africa is around an average of 22% in sub-Saharan Africa and 55% in North Africa, for a world average of 49%. This being said, African continent has the highest Internet growth rate in the world, with 73 million new subscribers in 2019, an annual increase of 20%.

Primary school enrolment remains the lowest in sub-Saharan Africa at 78%, despite a sharp increase since 2000. The booming African educational technology market is responding to the growing needs of young people seeking training… and jobs. 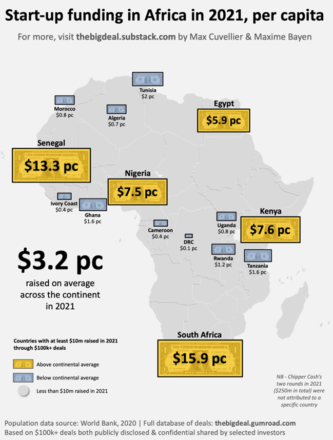 a record year for African start-ups in 2021

Driven by a recovering private equity market, African start-ups raised $4.3 billion in 2021. A record that confirms investors’ interest in the continent. Analysis.