With now 8 submarine cables, Djibouti is the fourth most connected state on the continent. In addition, since 2013, it has housed the first Data Center in the region. Today, the country dreams of a regional digital hub.

In January 2020, the Djiboutian public telecommunications operator, Djibouti Télécom, announced the deployment of DARE 1 (Djibouti-Africa Regional Express 1), which consists of the implementation of an undersea fiber optic communication cable, connecting the countries of the east coast of Africa. This eighth submarine cable which lands in Djibouti will link the capital to Mombasa, passing through Berbara, Bosaso and Mogadiscio.

DARE 1, a key infrastructure in a connectivity system that has become strategic

With a length of 5,000 km and a cost of $ 80 million, this submarine cable must provide a throughput of 36 Terabits. It is carried out by a consortium of telecommunications operators from East Africa, led by the operator Djibouti Télécom which owns 80%, with Somtel (Somalia) and Telkom Kenya. "With high capacity and low latency, the DARE 1 system will provide an alternative route to East Africa and the Horn of Africa, reducing congestion between existing systems, fostering competition and providing the necessary capacity. to a rapidly expanding region" declared Mohamed Assoweh Bouh, Managing Director of Djibouti Telecom, on the day of the launch. In the meantime, DARE 2 which will link Dar es Salaam and Maputo, DARE 1 will also be connected to the global network, via several cable systems in Europe, the Middle East and Asia.

Territory, most connected territory in the world, per capita, Djibouti dreams to be a Regional Hub

While the government wants to make digital a lever, and an accelerator of its development, Djibouti dreams of being a regional digital hub. A conquest in which Djibouti Telecom has already embarked. The only operator present on the Djibouti market, the company has established itself as the "drop-off point for submarine interconnection cables between Europe, the Middle East, Asia and Africa", according to the director who targets US $ 400 million in revenue by 2025 ($ 120 million in 2018). Thus, in 2017, the operator invested in Australia West Express Cable. Following a memorandum of understanding with the company GoTo Networks, specializing in the deployment of an underwater fiber optic system, the system links the city of Perth in Australia to the capital Djibouti, helping to increase the capacity. of the country's high-speed Internet connectivity.

Now accommodating 8 submarine cables - Gulf Bridge International (GBI), Transcontinental Europe India Gateway (EIG), EASSy, SEACOM, SEA-ME-WE 3, Aden-Djibouti regional cable, AAE-1 and SEA-ME-WE 5 - including 3 international, Djibouti is the most connected territory in the world in proportion to its population (barely 800,000 inhabitants). And it is mainly because of its exceptional geographical location on the Horn of Africa, at the entrance to the Bab el-Mandeb Strait, between Africa, the Gulf countries and Asia, that Djibouti appeared. as a privileged land of welcome for these installations.

Towards a Data economy with the Djibouti Data Center (DDC)

The current over-connection has led to additional activities, including data storage. Since 2013, Djibouti has hosted the first, and so far unique, Data Center in the Horn of Africa. The Djibouti Data Center (DDC), located a few meters from Djibouti Telecom's international fiber optic cable landing station, is the first neutral level 3 data center in East Africa, with access direct to all major international and regional cable systems connecting European, Middle East and Asian markets to Africa. It advertises itself as "a reliable and cost-effective gateway hub for many of Africa's fastest growing markets and service providers". A space designed at the request of customers and which already receives data from the US military, MTN, China Mobile, Facebook, etc.

While a second center is planned in Obock, 235 km north of the capital, intended for companies as well as public administrations, a memorandum of understanding was signed on March 20, 2019, between the companies Weco Weco, specialized in renewable energies, and Telsam, dedicated to telecom equipment, and the Djiboutian government represented by Djibouti Telecom and the Djibouti Electricity Company (EDD), confirming the attractiveness of Djibouti as the regional IT platform.

And investors are multiplying. For example, the telecommunications service provider Sparkle has announced that it is establishing its IP Hub in the Djibouti Data Center, with a view to its expansion in East Africa and South Africa. "This decision will allow Sparkle to strengthen the performance of its global Tier 1 IP transit service, Seabone, by providing cost-effective, high-quality and secure connectivity to OTTs, ISPs, local and international content and application providers," the company said in a public statement. In addition to Seabone, customers can take advantage of Sparkle's Ethernet Suite service to connect different international data environments with maximum flexibility and transparency. ” Likewise, the global wholesale network solutions provider, IX Reach, has also opened a point of presence at DDC. Which should allow it to provide its Cloud SDN (Software-Defined Network) connectivity services, remote peering and Ethernet services in Africa. IX Reach justified this choice of location by the central nature of this neutral, third-level infrastructure in East Africa, benefiting from direct access to all the main international and regional submarine fiber optic cable systems. connecting Africa with Europe, the Middle East and Asia. In short, DDC is a hub of connectivity for IX Reach. Announcing the development of new market segments such as the Internet of Things and Artificial Intelligence (AI), an IT Park project is on the government's roadmap.

“Yesterday, Djibouti was a land of meetings and exchanges for people and material goods; tomorrow it will be a trading ground for digital goods.”

"Digital technology will be essential to improving the living conditions of Djiboutians, expanding our economy, and strengthening our position as a logistics and commercial hub for the region. As the point of arrival for international submarine cables, Djibouti clearly has major assets to become a key digital player in the region", recalled, in this capacity, Radwan Abdillahi Bahdon, Minister of Communication. "Yesterday, Djibouti was a land of meetings and exchanges for exchanges between people and material goods; tomorrow, it will be a land of meetings and exchanges for digital goods. This is our challenge", adds Ismaïl Omar Guelleh, head of state of Djibouti.

For now, the challenge is to respond to the problem of youth unemployment, which is more than urgent in the country [Editor's note: the unemployment rate for the entire working population is 45% that of young people from 20 to 25 years old is around 80%]. "Djibouti's economic growth is inevitably linked to its position as a technological and digital hub" confirms Samatar Abdi Osman, founder of the Center for Technology and Innovation for Development (CTID) which supports young people with innovative projects with high impact in ICT fields. If the young man concedes that the Djiboutian government, for several years, "has made a lot of efforts in this direction by launching large structuring projects", he adds: "so that ICTs become the real factor of acceleration of growth and for Djibouti's competitiveness, strengthening human capital remains an essential element in order to better understand this technological revolution and the professions of the future." Hence the commitment of CTID. "As an incubator specializing in training, support for start-ups and support for leaders of innovative projects focused on digital in Djibouti, the CTID has launched over the past 3 years major training programs for young people in the digital technology with the aim of strengthening their employability (Code 4 Youth in partnership with UNICEF, Djibouti It Talent, Girl in ICT). In 2021, we plan to launch the Horn Digital Academy program to strengthen the employability of young people by helping them find a new activity through digital."

From there to realizing the dream of the Head of State, to see Tech Activity ensure more income than the port, there is only one step... or a phase of connection. 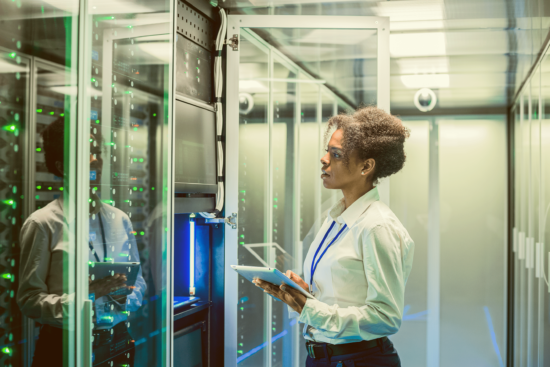 As Ugandan businesses and individuals continue to expand online, the digital revolution is being driven by a growing number of data centers.

Pan-African Data Center operator wingu.africa will set up a Hyperscale Data Center in the Addis Ababa ICT Park in Ethiopia. The beginning of an expansion in this country which is matched only by its ambition to conquer even more markets.

Guinea – Launch of the national internet backbone, a step forward in improving connectivity

Guinea set up its national internet backbone. An ensured access to submarine cables to improve internet connection everywhere in the country. The infrastructure also breaks the digital divide, widening access to the broadband connection.