Whether they are still members of the diaspora or have already rolled their way back to the continent, more and more sons of Africa are supporting the innovation of young people and women, and even of the not so young. A synergy of actions, especially in the digital sector, which contributes to the resilience of the African ecosystem.

They are serial entrepreneurs and captains of African industry who firmly believe in the resilience of the African continent. They certainly do business, but above all they create bridges between Europe and Africa, between Canada and Africa. They are part of this diaspora which offers growth levers, which advises, mentors and supports women and young people on the continent. And now participate in a concrete way in the development of the continent: the remittances of African migrants to their families exceed in amounts those of development aid and investments of foreign companies. With a record figure recorded in 2019: $ 554 billion in remittances to low and middle income countries, the diaspora thus appears to be a major player in the development of the countries of origin. But while these funds are used above all to meet primary needs (consumption, rent, education, health), for the sons and daughters of the continent, the challenge now is to act, in a more sustainable manner, in development, through digital entrepreneurship.

"Mentoring sessions, but also, for the most promising, a connection with people who have experience in their fields"

Among these worthy sons of Africa who have emigrated, but who remain connected to the sources, Rodrigue FOUAFOU. Very often called, Mr. Africa, because considered the most connected African, he is a technology enthusiast with extensive experience in incubating, investing, accelerating new businesses as well as mentoring. Born in Cameroon before moving to Canada, he is the founder of HartNamtemah, Inc., a consulting and investment startup based in Toronto, Canada, which he co-founded to specialize in mentoring and funding of African startups. He works with investors interested in financing business enterprises in Africa. Among other beneficiaries, successful companies such as Kasi Insights, Kiroo Games, Njorku…

Now based in Kigali, Rodrigue FOUAFOU founded Wouessi, a platform that brings together young African designers of tomorrow's technologies. "When I identify budding entrepreneurs, I connect them with people in my network based on their needs and interests. This often results in mentoring sessions, but also in connecting with people, internationals, those in the diaspora, and entrepreneurs on the continent who are successful and who have experience in their fields and will be able to support them in the development of their project." If the Networking that takes place here and there, around initiatives to match entrepreneurs, investors and institutions, has positive effects, nuance Rodrigue FOUAFOU, remains to increase the large-scale adoption of the solutions proposed and the partnership agreements for greater impact.

"We, the diaspora, have all the resources we need to solve our problems, the problems of Africa"

Another example, that of Gilles Komi MAGLO, founder and CEO of MES & DAK Corporation, Togolese by origin, living in Germany. "We have within us, the diaspora, all the resources necessary to solve Africa's problems." What about the impact of their actions? For this experienced entrepreneur, developer of autonomous businesses and moreover passionate about the development of the MSME sector in Africa and the building of bridges between Africa and Germany, who designed the M'Network platform, the results are measured on a daily basis. Its approach: favor matching, offering a framework for B2B, B2C, leaving the privilege to the company to choose the contacts with whom it has the best option in its development.

In Germany also, another platform has established itself, over the editions, as an essential meeting between European tech entrepreneurs, from the diaspora but not only, and project leaders on the continent. Afrolynk, founded by Moses ACQUAH in 2016, but operational since 2018, supports and brings together entrepreneurs, startups, investor organizations from the EU's tech and entrepreneurial ecosystem in Africa. "Afrolynk promotes an enhanced African-European trade relationship by emphasizing technology as the main driver of integration," says its instigator. It is an exchange of best practices, investment of funds, training... African startups are starting to be more and more attractive to international investors. But, observes the latter, for a greater impact, the young entrepreneurs of the continent must be accompanied in the structuring and the development of their solution. This is where diasporas have a role to play and it is precisely Afrolynk's vocation to be a catalyst for good practice in this area. Social enterprise, present in 8 African countries - Ghana, Kenya, Nigeria, South Africa, Tunisia, Uganda, Zambia and Zimbabwe - has trained more than 3,500 young men and women, across Africa, and facilitated the creation more than 300 jobs since May 2019.

The diasporas, the basis for the renewal of relations between France and Africa and beyond, between Africa and Europe, "an imperative to face the American and Asian digital giants"

More and more, on the sidelines of these initiatives led by the entrepreneurs themselves, institutions, local communities, donors are joining the movement and are also focusing on diasporas and digital entrepreneurship. One of the pioneers, Pierre De Gaétan NJIKAM, Franco-Cameroonian, lawyer by training formerly in charge of partnerships with Africa and the Francophonie in the city of Bordeaux, among the first to "connect" initiatives in France and Africa, through the National Diaspora Days (Journées nationales des Diasporas - JNDA), the 8th edition of which was held last September in Bordeaux. Among the highlights of the meeting, the Numafs, digital Bordeaux Africa meetings, where "talents" from the diaspora come each year to present their solution. Transforming fund transfers into health tickets, creating online e-learning platforms, promoting Made in Africa, through online Market Places… So many fields of action in which diaspora entrepreneurs operate, perceived by Pierre de Gaëtan NJIKAM as "the basis for renewing relations" between France and Africa and beyond, between Europe and Africa, but also as "an imperative to face the American and Asian giants of digital", as Mister Africa Tech Samir ABDELKRIM, Founder of EMERGING Valley… himself from the diaspora, will point out. 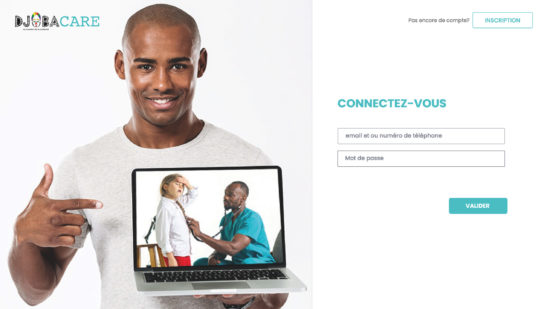 DjobaCare is a platform that allows you to benefit from remote medical services. Designed to facilitate the medical follow-up of parents who have stayed in Africa by the diaspora, the platform is currently being tested and should be open to the general public in the coming days.